﻿Kelso Dunes, encompassing approximately 45 square miles, is the largest eolian dune field in the Mojave desert.  The four primary ridges of the dune field, nestled between the Granite Mountains to the south and the Providence Mountains to the east, rise to heights over 650 feet above the shrub-dotted landscape. The dune field itself is over 25,000 years old with a record of 5 separate dune-building events related to climatic shifts preserved under the shifting sands.﻿ 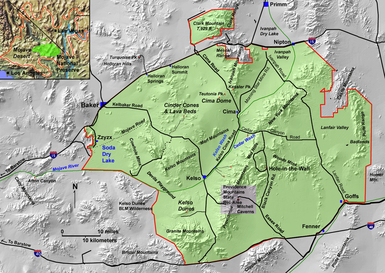 
The image at left shows the extent of the Mojave desert protected under the Mojave national preserve. The Kelso dune field lies in the southwestern portion of the preserve, approximately 8 miles south of the Kelso ghost town to which the dunes owe their namesake. 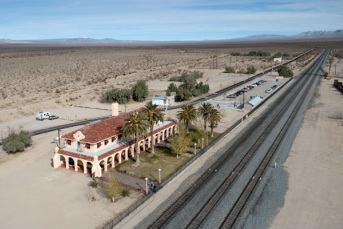 Photo courtesy of: scotthaefner.com
The town of Kelso, named after a humble resident who won the lottery to name the town, was founded in 1920. The small town of Kelso flourished as a Union Pacific train depot, attaining over 2,000 residents at its peak. Like many Western boom-towns however, this success was short-lived and the town became abandoned after a few decades. Kelso has found new life recently as the old train depot has been converted into a visitor's center for the Mojave National Preserve with a multitude of interesting and helpful displays about the region.

Kelso dunes is actually part of a much larger sediment transport system including Devil's Playground to the north. Prevailing winds blow sand eroded from the San Bernadino Mountains east through Afton Canyon and over the dried up sediments of Soda and Silver lakes where they coalesce in the Kelso Dunes. The dunes lie where they are due to the physical barrier imposed by the adjoining Granite and Providence Mountains. These two ranges in turn provide sediment to the dunes as they are eroded. The cleverly named Granite Mountains to the south, which are largely granitic in composition, erode to supply quartz and feldspar grains as well as black hornblendes. Another species of black grains are supplied by erosion of the lodestone-bearing Providence Mountains and thus contribute magnetite grains to the dunes. The magnetite and hornblendes can be differentiated by simply running a magnet through the dunes. 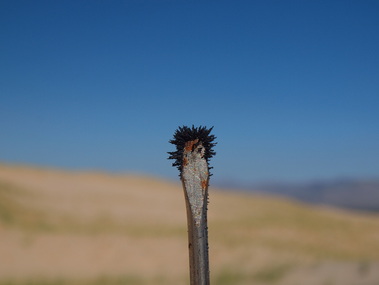 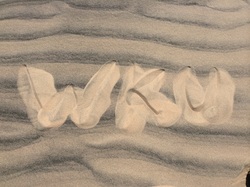 The by-product of some creativity and a lot of sand.

While on the dunes one may observe a peculiar phenomenon known as "booming" or "barking" dunes. Some may be familiar with squeak of some kinds of beach sand when someone walks over. The strange auditory phenomenon exhibited at the Kelso Dunes is similar to this, but at a much lower frequency that can even be felt in the sand itself. This sound is often described as a low rumble- drawing allusions to far away cannons, prop plane fly-bys, or even creepy dirges. The characteristic "booming" is produced by friction and fracturing of sand grains during mini sand avalanche events that can be induced by the action of wind blowing over the dunes or by walking and/or jumping on the dunes.This phenomenon is so strange and rare in fact, that Kelso Dunes is one of only 27 documented locales worldwide to experience it. A more in-depth and very interesting treatise on the subject of booming dunes may be found by following the accompanying link: http://www.schweich.com/sbdA.html

An audio sample of this bizarre auditory phenomenon is provided below.
The dunes, much like Tusken Raiders, will attack with very little provocation...
Nah, but seriously:
The dunes also serve as their own type of micro climate, distinct from that of the surrounding mountains and the rest of the Mojave. As a result Kelso Dunes is home to a variety of desert flora and fauna along with a number of endemic species call the dunes their home and have adapted to fill their own ecological niche within the dune ecosystem.
For additional information please consult: http://www.desertusa.com/mnp/mnp_kelso.html
http://geomaps.wr.usgs.gov/parks/mojave/kelso1.html
http://www.nps.gov/moja/historyculture/kelso-depot.htm
and
http://www.nps.gov/moja/planyourvisit/visitorcenters.htm