Over the years, mining operations have taken hold and fell apart in southern California.  Many of the towns that exist in this arid region of America only exist because of the rocks that surround them.  Southern California has a rich history of mining, boom towns and abandon towns, like the one seen above.  Many different types of minerals have been taken from the hills for many different purposes. 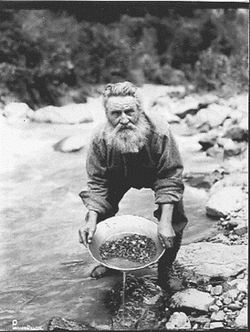 Gold, as this old miner may have been looking for, is really what put this area on the map.  During the gold rush of the mid-1800s, people from all over the country rushed to California in order to get their share of the gold.  From stories passed back east, all of the hills, streams and valleys held gold, all you had to do was take it.  Many people flocked to Death Valley in search of gold because of the mild winters, beautiful landscape and absence of crowds.  However, what they found was very harsh summers, no water and no gold. 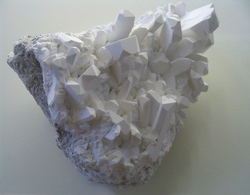 There was a mineral in Death Valley that was worth mining.  This mineral is called borax.  Borax was called the white gold of the desert.  In the 1800's, borax was used for an antiseptic, water softener, general purpose cleaner, along with many other uses.  There was an issue with mining borax in Death Valley.  It was very plentiful in the area, but do to the remoteness the valley, there was no way to get it product out.  A 165 mile road was built, traveled by teams of mules, to the the product to sellers.  These mule teams, sometimes consisting of 20-mules, became an iconic symbol of borax, and can still be seen in your local stores with 20-Mule-Team Borax. 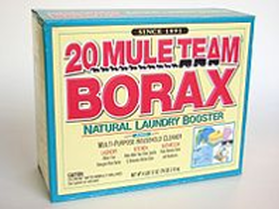 The Mojave Desert has seen its fair share of mining as well.  Unlike Death Valley, gold was successfully mined in the Mojave.  Gold, silver, and copper had been found here before California was a state, and miners had already came to take their share.  However, a strong Native American presents in the area did not like the idea of the white men excavating their land.  The threat and acts of violence pushed miners out of the area for many years, including some very profitable corporations in the area. 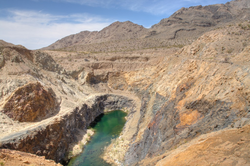 Gold, and other precious metals were not the only minerals that could be taken profitably our of these hills.  In the early 1900's, Kaiser Steel opened up the largest steel mill in the west.  Iron was needed to make this steel mill possible, so Mr. Kaiser looked into the desert for answers.  What he found was arguably the most important iron deposits during the World War years.  The iron ore that was pulled out of these mountains was used to create steel for American troops fighting over seas.  The photo to the left is of Vulcan Iron Mine.  This mine has been noted as " one of the most important wartime production claims.  These deposits held over 32% iron.
For additional information of mines, or the history of mines in southern California, please see some of the links below.
Mines in San-Bernardino County
Chronology of Ghost Towns & Mining History
Mining History in the Mojave Preserve
Sources:
•http://library.thinkquest.org/5181/ •http://en.wikipedia.org/wiki/Borax
•http://gocalifornia.about.com/od/cadeathvalley/ig/Death-Valley-Photo-Tour/Harmony-Borax-Works.htm •http://en.wikipedia.org/wiki/20_Mule_Team_Borax
•http://www.empirenet.com/rdthompson/lane10.html
•http://eecue.com/b/673/Desert-Explorers-Rendezvous.html
•http://www.blm.gov/ca/st/en/fo/barstow/salt_creek.html
•http://mojavedesert.net/mining-history/chronology.html
•http://sometimes-interesting.com/2012/02/08/from-boom-to-bust-to-boom-to-bust-eagle-mountain-ca/
•http://digital-desert.com/mojave-preserve/mining-history.html •http://westernmininghistory.com/mine_detail/10036183 •Steven Ginn-Photo
•Clark, William D., Gweneth Reed. DenDooven, K. C. DenDooven, and David Muench. Death Valley: The Story behind the Scenery. Las Vegas, Nev. (P.O. Box 14883 89114): KC Publications, 1980. Print.