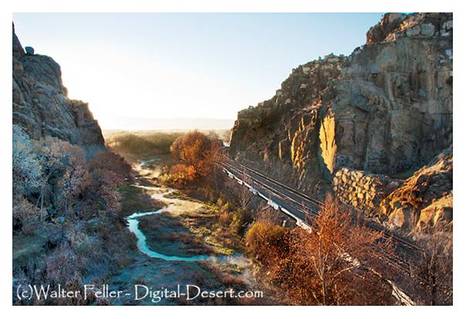 T﻿h﻿e
Mojave
River
The Mojave River groundwater system ventures above ground at "The Narrows" in Victorville where the deep-rooted granite cliffs force groundwater to the surface. 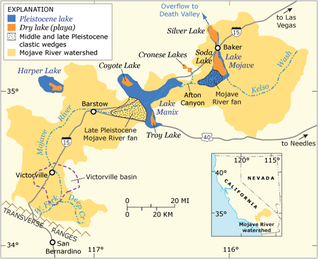 The floodplain and regional aquifers are the desert's most reliable water sources and are unconfined aquifers, or aquifers open to the atmosphere through the overlying substrata-- they are not separated from the atmosphere by overlying impermeable strata, like shale for example. The regional aquifer (the aquifer that underlies the region), though it is the most widespread, is the least productive and is composed of undifferentiated deposits of Holocene to late Pliocene age, with intermittent consolidated Tertiary sediments.The floodplain aquifer is the least expansive aquifer and is the region's most productive aquifer. It is composed of permeable young river deposits of Holocene age and older river deposits of Pleistocene age. These sediments are deposited by the flooding of the ancient flowing Mojave River (The overflowing of rivers is what creates floodplains, or depositional environments characterized by silts, sands, clays, and organic matter.). The Mojave River today recharges this aquifer, although minimally, as its waters flowing from the Transverse mountains filtrate through the soil and sink to the aquifer where the Mojave River's water  is included in the aquifer body. 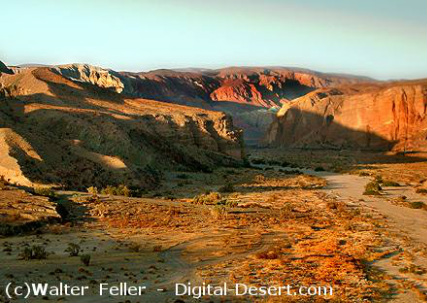 Here at Afton Canyon, geological circumstances similar to those at the "Narrows" in VIctorville force slowly flowing groundwater in the Mojave River groundwater drainage system up from the depths to the desert floor as a spectacular showcase of the desert's diversity. Afton Canyon is one of the only two places along the Mojave River where water runs perennially or semi-perennially. 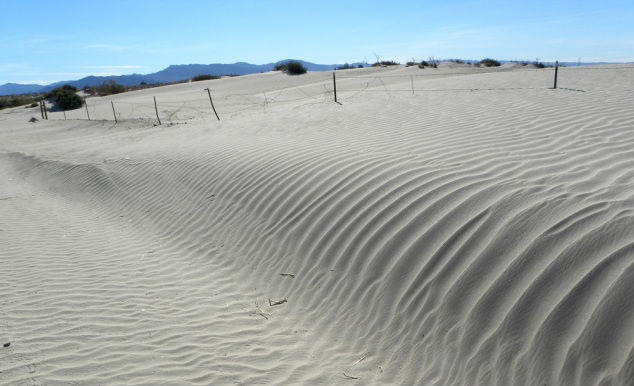 The Mojave River, formerly a perennial river, has experienced pumping so much so that it has ceased to flow and now only flows perennially within two reaches of its entire river body. The river still flows occasionally during ephemeral flow events though usually does not flow but a few miles from where it drains the Transverse Ranges.  In this image one may see to what extent the Mojave River has been pumped: it is now only flowing sand.

Soda Lake is the terminal point of the Mojave River groundwater and surface water drainage systems. 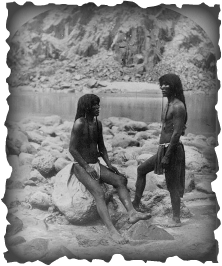 Blocked drainage systems and increased precipitation with the onset of cooler (ice age) conditions at the close of the Tertiary and beginning of the Quaternary resulted in the filling of basins with water and sediments. Lakes filled and overflowed, and as the overflow converged the Mojave River was created. Though glaciation did widely occur during the Quaternary, there was actually no glaciation in the Mojave River Basin region and so the cooler, wetter ancient environmental conditions in the Mojave River Basin and surrounding areas were ideal for the population of the area by indigenous peoples. The Mojave River received its name when United States government explorer John. C. Fremont was made aware of the river by the Mojave Indians. He subsequently named the river after them.
﻿﻿﻿For More Info and Neat Desert Images, Check Out These Websites! ﻿﻿﻿
For Images, See:
http://greenlifeinsocal.com/2010/12/03/a-brief-tour-of-the-mojave-desert-preserve/
http://digital-desert.com/a/ddna/mnt01.html
http://digital-desert.com/natural-mojave-river/
http://yankeebarbareno.com/2011/02/17/soda-lake-reflections-carrizo-plain-national-monument/
http://digital-desert.com/afton-canyon/#
http://www.loc.gov/pictures/resource/cph.3a28558/
http://pubs.usgs.gov/fs/fs-122-01/